The route is set for what could be the most challenging of all the Ocean 2 Ocean adventures, as Rod and the Vintage Adventurer team drive from Surfers Paradise, Gold Coast, to Fremantle, Western Australia. 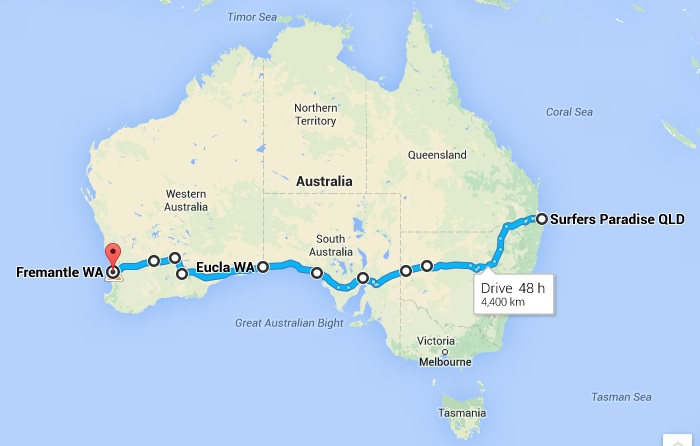 We depart from the Surfers Paradise sign, right on the Esplanade, at 10am on Tuesday 3rd June. Rod and co-driver Austen will be at the wheel of the Tudor Rose, a 1930 Ford Model A that was used on the Ocean 2 Ocean USA challenge in Oct/Nov 2013.

We should arrive at the beach at Fremantle, entering via Mews Road, at 8am Western Australia time, having driven 4,440 kilometres. But there won’t be much time to celebrate as at 9am, we depart and head back the way we came!

We will arrive back at Surfers Paradise at approximately 11am Gold Coast time to a huge reception as family and friends, partners and supporters join us to (fingers crossed) celebrate us completing the challenge and setting a new World Record!

The support crew will be split between two vehicles – the mechanics with travel in a Mercedes Vito van while the media crew will drive the prototype of the Kidney Kamper van, which is another Mercedes van that has been converted to a Kamper. Both vehicles will travel both journeys while the support teams swap over at Fremantle – all except for cameraman Peter Turner and Media & Ops Manager Andrea Seed, who also drove the support vehicle in the Ocean 2 Ocean USA.