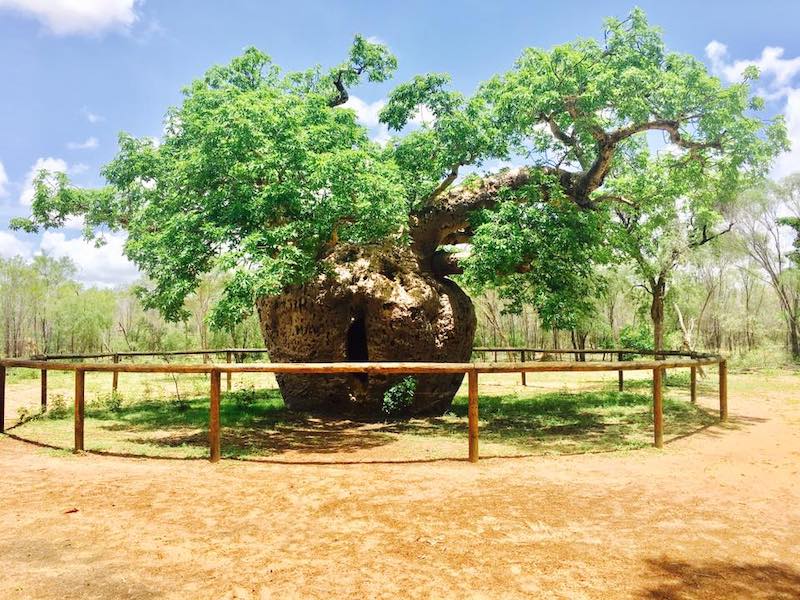 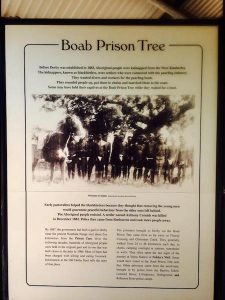 This morning we left Broome, after making a quick trip to one of the many beautiful South Sea Pearl shops that line the Main Street.  How could you drive this far without looking at some of the gorgeous saltwater pearls that the region is famous for!  Then we headed back east and up north to Derby.

Not far from Derby is the ‘Boab Prison Tree’. This tree is both awesome and tragic at the same time. The signpost says that in the late 1800’s it was believed to be a resting place for many Aborigines, who were chained together at their feet as they were rounded up from all over the region and marched up to 48 kms per day in chains to the jail in Derby. Apparently, many of them were charged with killing livestock in the region. They would rest under this tree on their final approach to Derby.  Whilst this particular Boab tree was enormous, there are many hundreds, if not thousands of them that line the road and surrounds for hundreds of kilometres.

After a short drive through Derby we tracked back a few kilometres to the Gibb River Road turnoff. Whilst we knew that it was closed after about 60 kms, we wanted to explore at least a small portion to determine whether it would be suitable for The Rattler to travel on. They don’t call this a recce for nothing!

The region has vast flat plains that are covered in water as it flows toward the ocean, crossing all roads and tracks in its path. Whilst it wasn’t raining here today, these waters take a few days to move over landscape from further inland. So we tracked back towards Derby and down to the main highway, then took the left turn and headed back east up the highway towards Fitzroy Crossing where we have pulled in for the night.

In many places on the highway, there are thousands of grasshoppers covering the road. Today we pulled over to take some photographs and discovered the live ones feasting on the remains of the ones that weren’t so lucky as to avoid the passing cars. This leaves a long straight line on the road, where the dead are being eaten by their mates!  This gives a whole new meaning to taking one for the team.