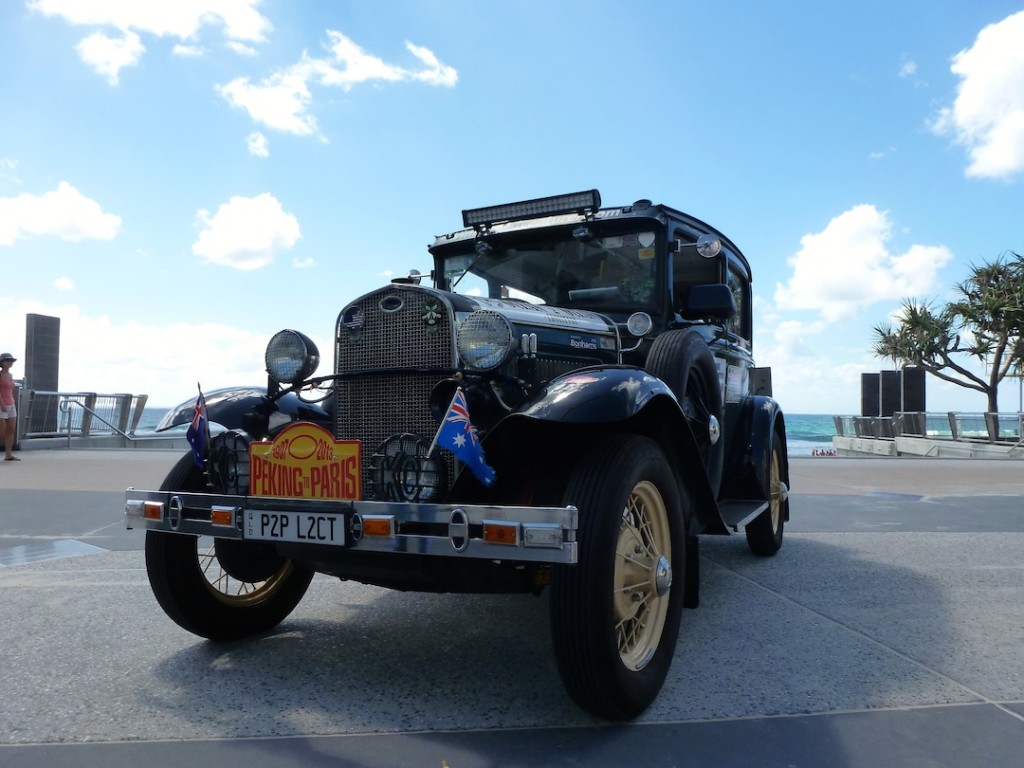 After not one, not two but three gruelling trips last year in the Peking to Paris Rally, the first attempt at the Ocean 2 Ocean USA and the World Record setting final journey, our 1930 Ford Model A aka Tudor Rose has been having a well earned rest. But with the next adventure, the Ocean 2 Ocean Australia, only weeks away, we’ve got some serious work to do to get the car ready for action.

First up was a full evaluation from Rod Wade… well he knows the car better than anyone. After careful analysis of the engine that did the o2o USA it was decided at the last minute to replace the engine with a new rebuilt one from Schwalms in the USA. Obviously this wasn’t great news when we’ve got to get it built and then transport it from the other side of the World! But thanks to Ora Landis, the new engine has now arrived and after three days hard slog, is now ready to start its road trial.

Fingers crossed all will be ok and ready to go as co-driver Austen Ritchie is yet to have his 1000k trial run prior to the start on June 3rd.

The engine that has been removed from Tudor Rose has had a complete strip down and been rebuilt so it can be carried in the Mercedes Vito support van as an emergency spare along with a host of other spares that we hope we won’t need!

Here’s what Rod’s been up to: 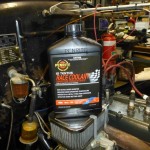 One of the important components of a cooling system is to ensure that the radiator water is treated to give the best performance. For the o2o OZ I am using Penrite products entirely. In particular I am using Penrite 10 Tenths RACE COOLANT. This is a coolant that lasts 3-5 years and reduces ‘hot spots’ especially in older cast iron engine blocks and heads and helps reduce small steam pockets that are sometimes caused by water having a high capillary attraction to odd spots in the engine. My experience is that Penrite 10 TENTHS RACE COOLANT prevents this from occurring resulting in more efficient cooling. 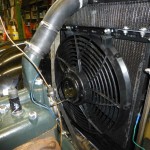 With the electric fan now fitted it was time to test run the engine. The result was amazing. Temperature was controlled even without the ram air factor. Ram air is the term used for the air that is pushed through the radiator as the car is driven down the road. Some race cars do not have fans at all. Another reason for my Davies Craig set up is that it only operates when needed whereas a belt driven fan works all the time and robs power from the engine. When on constant drives ‘ram air’ is all that is needed to keep the engine cool. Older cars always had the fan running and robbing vital horsepower. 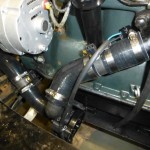 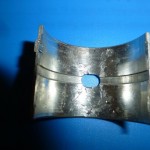 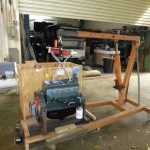 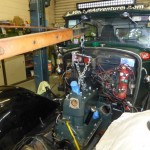 A transplant for Tudor Rose begins 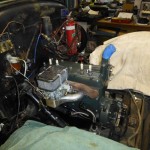 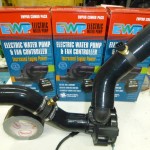 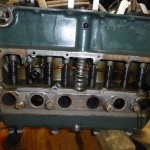 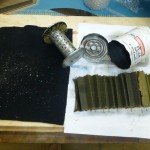 Part of my service procedure for Tudor Rose is to cut the oil filter open, wash all parts in petrol and strain through a black cloth to look for metal particles etc which is a clear indication of what is happening within the engine. This is what I found, particles of aluminium obviously from the bearings.

Rod’s advice for breaking in a new engine…

After the last 15 minute run is completed, run the engine for 30 minutes.
(Again, just above idle with the spark half advanced.) Engine acceleration
during this period is acceptable with momentary bursts only, then returning
to just above idle.

After the break in running time, re-torque the head to 50/55 foot lbs (65
foot lbs. for high compression head). The head gaskets tend to compress during the engine
warm-up. An oil change is also suggested at this time. (SAE 15W-40
detergent oil with a new bottle of ZDDplus.) I use Penrite Classic 25w-70
which has 1610ppm of zinc so I don’t need the additive and because I travel
in high temperature climate areas I use the 25w-70.

After 200 miles have been put on the engine, not exceeding 35 MPH, an oil
change is necessary.

Note: Full break-in may not occur until 500 miles have been put on the
engine, depending on driving conditions. During this time, keep your speed
at or below 35 MPH. Oil changes should be made every 500 miles or every driving season,
whichever comes first.