Drama with 9 days to go!

Drama with 9 days to go!

On Saturday co-driver Austen and crew member Darran came to help with the preparation of the Kidney Kamper for WiFi, the Vito for driving lights etc. Then it was onto Tudor Rose, Austen and Rod were fitting door seals and rubbers and were rattle hunting. All was going really well.

It was now time for Darran’s test drive seeing he is the emergency driver for Tudor Rose on the return trip from Fremantle to Surfers Paradise. Darran hadn’t driven an old car like this before but he did really well and mastered the art quite quickly.

Back at the workshop Tudor Rose was parked up and idling down for a time then Rod drove the car onto the hoist for the final once over before the decals were to be put on and then Tudor Rose would be polished ready to do the o2o OZ when Rod looked down on the ground and saw a small pool of oil!!

DRAMA……real drama this was gearbox oil. Rod had changed the gearbox oil yesterday and added one of the world’s best additives which increases the viscosity of the oil slightly but creates a cushioning effect between the gears under load.

THE GEAR BOX HAD TO COME OUT…….everyone that has a Model A will know what a drama that is. One has to decide to remove the engine etc to get to the gearbox OR remove the differential rear spring and all then take the gearbox out leaving the engine in place. We did the latter.

THE PROBLEM……..When the gear selector top was put on in the USA when we fitted a new gearbox the gasket that seals it to the bell housing was doubled over and laying on top of the gearbox case.

This meant that the top gasket was not sealing properly and by adding the world’s best gear box additive it increased the viscosity of the oil to the extent that it was being flung around inside the box like never before and found its way out and onto the ground between the main gearbox housing and the gearshift selector top.

This was not an obvious scenario prior to pulling the box out. To be sure to be sure it had to be done and Rod was relieved that what we found was the cause.

It took Austen, Darran and Rod nearly four hours to remove the gearbox.

On Sunday Rod will clean everything down and fit new gaskets and begin the reinstatement. Austen will give him a hand later in the day, so all being well Tudor Rose should have a final test drive Sunday eve. She will then be ready to on the dyno for the final tune.

Wow what a day. Some time you have to be glad that trouble comes along and we are glad it did today because if Darran had not have had his test drive, the gearbox problem would have surfaced hundreds of kilometres into the o2o OZ and such a strip and rebuild would be virtually impossible on the side of the road. Can be done but what a nightmare.

Across the US the gearbox did lose some oil because it was quite low on its return to Australia. Now we know why… 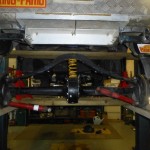 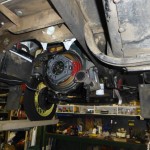 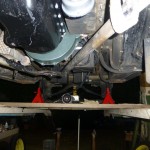 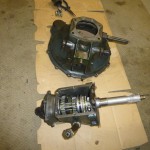 The bell housing and gearbox out and on the ground 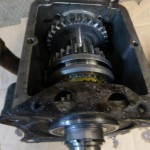 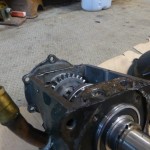 Another pic of the offending gasket