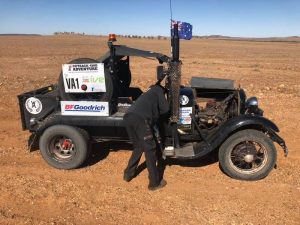 This adventure is not quite turning out the way I had planned!  Yesterday we set off north west, hoping to catch the rally up in Birdsville before evening.  Meanwhile, our support crew was carrying precious cargo down from Quilpie, after meeting up with Austen.

We filled up with petrol as we left town and hit the road. The journey was long and complicated with numerous stops to try and work out why the car was losing power and was coughing and spluttering all over the place.   We suspect that we might have taken on some dirty fuel,  but it’s equally likely that the coil lead was shorting out with moisture from the radiator leak.  Maybe it was a bit of both!  Nevertheless, we persevered and made it to the end of the bitumen before turning right and heading north on the dirt.  Only 509 kms to go!

This is where it all fell apart. The road was as bad as the worst we had already travelled on. After taking a beating for 45 kms we knew that The Rattler was not going to be able to withstand another 450kms of these tracks, and we were only averaging about 40 kms an hour!  There was no choice but to abandon any hope of making it to Birdsville.

Feeling defeated, we turned the car around and started heading back the way we came.  Within about 15 minutes the Fuso finally caught up with us. Trevor and Billy had been driving for almost 11 hours, having left at 3 am that morning. It was devastating to give them the bad news that we were going to pull the pin. 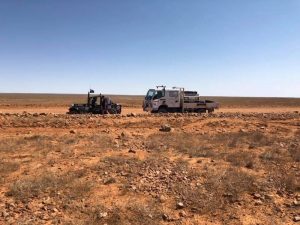 We kept driving until right on dark. In total, The Rattler travelled 750 kms yesterday, and ended up exactly back where we had stayed the previous night.

This morning we all headed off east, planning to make it as far as we could before dark.  As I’m sure you know, there’s a lot of time to think when you’re travelling down a long straight black road. And that’s exactly what I did. I pulled over, grabbed the map and started to work out how long it would take us to drive on the bitumen to meet the rally at Wilpena Pound in South Australia!

That’s exactly what we are doing. There will be no quitting on this trip. We will drive until the wheels fall off!  Ok, maybe not, you know what I mean.  So tonight, we are back in Cobar and tomorrow we head to Broken Hill. On Friday we will rejoin the rally at Wilpena Pound.