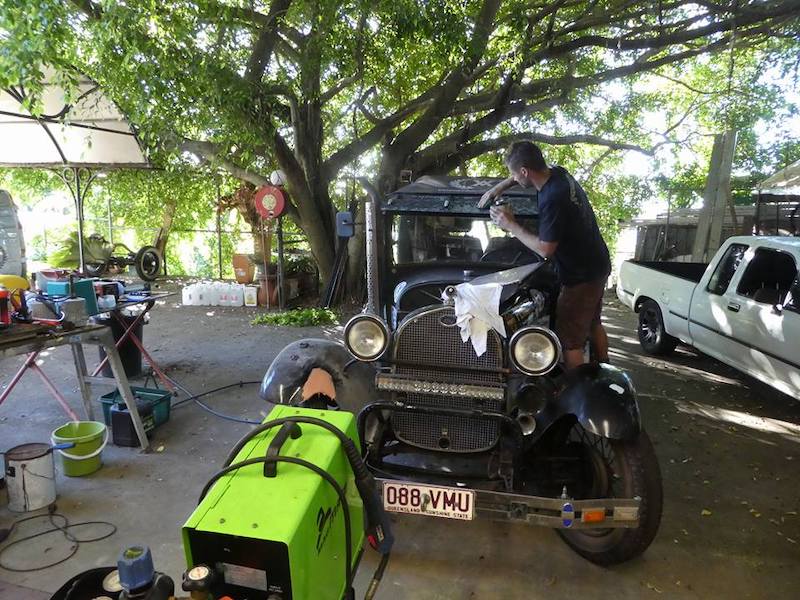 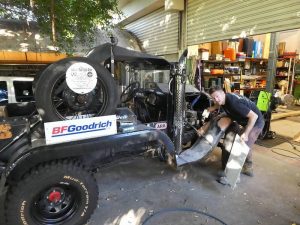 It was time to ditch the building of the new 20 car garage and start to pretty up The Rattler.   Plenty of red dust still in crevices that was beyond water blasting to remove. Katie’s partner Dean came to do some dent knocking, bogging and spray painting.  Dean was great and very professional with what he did.

I am so anxious I could fire up the Rattler and go tomorrow. When I started the Rattler today to back it out of the garage it was such a beautiful noise. I really do love this 1929 Model A Ford. I came inside for a cuppa and there on the telly were two 4wds on the Madigan Line in the Simpson Desert…..bogged! The Rattler never did get bogged in the Simpson Desert on what we called the Desert Rattler Run where we drove from Steep Point on the west coast of Australia in WA to the Byron Bay Lighthouse on the east coast of Australia via the 5 deserts. Never did get bogged.

On August 5th we will head off for Birdsville again and this adventure is titled Rattler Run III and out to Big Red we will go to challenge the steepest sand dunes in the Simpson Desert.  We will do a few runs from west to east up the steepest side of the notorious killer dune before heading west to Poeppel Corner and up the Hay River Track to Alice Springs.

From Poeppel Corner to Alice Springs I have allowed 2 days but Hema and others say 4 days….now that is a challenge I need for the 78 year old car.  The Rattler will do it and the only weak link will be the driver….me….if I haven’t prepped the car correctly it could fail!